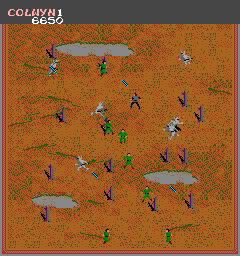 Krull is a video game based on the film of the same name. The first Krull adaptation was a 1983 arcade game manufactured by D. Gottlieb & Co.. A home adaptation similar to the arcade version was planned for the Atari 5200, but poor sales of that console prompted the decision to release the game on the Atari 2600 instead. A pinball version was also developed but not put into production. Arcade version Released in 1984, the Krull arcade game was programmed by Matt Householder and Chris Krubel. The graphics were done by Jeff Lee (one of the creators of Q*bert), the sound by David Thiel. The cabinet art was created by Terry Doerzaph. About 2500 units were produced. Gameplay First event: Pickup the pieces (five) of your weapon... the glaive, avoid all boulders. Second event: Shoot the slayers, rescue your army (very much like Robotron). Third event: Pick up your army, lead it to the hexagon. Fourth event: Break down the front wall of the hexagon... when it is black. Fifth event: Save Princess Lyssa, avoid the beast, avoid his fireballs.

Krull is a multi part action game based on the movie of the same name. A beast and his army have traveled through space until finally landing on the distant planet of Krull and ravaging the entire planet. But there is a prophecy which tells of a king and queen who will someday take back the planet. These future rulers are Princess Lyssa and Prince Colwyn. But before their marrage, Princess Lyssa is captured by the beast!

You play the part of Prince Colwyn on a mission to rescue Lyssa and destroy the beast. The game is divided up into several parts.

The first part takes place during the foiled wedding. A large number of slayers arrive at the castle, and you need to defeat as many as you can to earn points. But eventually Princess Lyssa is captured.

In the next section you need to ride your horse towards the Widow's web; on the way you can collect Glaives which may be used to fight the beast. Once you reach the web, you need to make your way to the cocoon at the top of the web in order to find the correct path to the Black Fortress. The crystal spider along with strands of the web make maneuvering your way around this screen a challenge. Once you know the correct path, you ride on to the Black Fortress.

Here you need to use the Glaives you've collected to free the Princess from a prison, and then destroy the beast! After successfully completing all tasks, the game will repeat at a more difficult skill level.